The Monnaie de Paris organizes the first Parisian retrospective of the German artist Thomas Schütte, which will unfold in the courtyards and interior spaces. Since the 80s, the artist appears as one of the main reinventors of sculpture. He is today a major and unclassifiable artist. The plurality of mediums used by Thomas Schütte (sculpture, installation, photography, painting, drawing) corresponds to a set of genres, that of portraiture, still life and landscape. The exhibition in three acts – women, men and architecture – testifies to Thomas Schütte’s unsettling and grim analysis of the organization of society and its impact on individuals. “My works are meant to introduce a twisted point of inquiry into the world”.
After studying at the Academy of Fine Arts in Dusseldorf where he was a pupil of Gerhard Richter and Fritz Schwegler, Thomas Schütte emerges in the early 1980s as one of the main initiators of the new German sculpture, like artists like Isa Genzken or Hubert Kiecol. Several major exhibitions or retrospectives have allowed Thomas Schütte to be revealed to the general public, as in 1990, at the Museum of Modern Art of the City of Paris, and in 1988 at the White Chapel Art Galery in London. Schütte finds an original translation of his reflection on the representation of power and the social responsibility of art in architectural models conceived as “models to think”. The idea of ​​monument is central to his reflection. Schütte’s work is expressed in a more peaceful way in engravings, watercolors of flowers and portraits, some intimate. The questioning on the scale, from the monument, remains in representations of characters, silhouttes larger than nature, distant and absorbed in themselves. 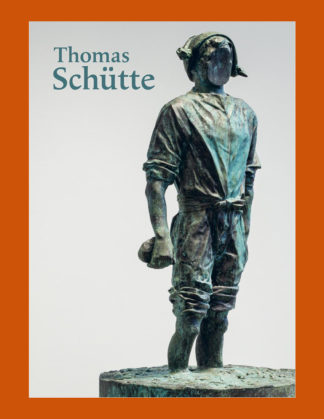