Since the beginning of his artistic career, Thomas Schütte has created an extensive œuvre of works on paper. He creates series or cycles, executed in watercolours, ink and various coloured and lead pencils, dedicated to specific subjects. Mixed into these works on paper are ironic commentaries on contemporary events, critical reflections, observations and insights. This is particularly true of his most recent watercolour series, “Deprinotes” (2006-2008), which has never been presented to the public. Free of self-censorship, these works draw on classical motifs, such as still lifes of flowers, fruit or vegetables.

The “Mirror Drawings” (1998-1999) are self-portraits that Schütte created over the course of a year while gazing into a shaving mirror. Here Schütte dares to approach himself through the image of his outer appearance. The artist declares the attempt as failed.
Schütte often presents his works on paper in conjunction with sculptural works. Watercolours are integral components of the installation “Melonely” (1986). Fourteen watercolours depict strongly schematized pieces of melons that are closely related to the eleven-part, space-encompassing wood sculpture. In the mid-1980s, Thomas Schütte began drawing fruit and vegetables. He regards these works as a “way out of the gloominess of the early 80s”, as a way to satiate his appetite for images and as a reaction to the constraints of conceptualism that had become defining and academic. The title’s play on words also alludes to an emotional level that the sweetness of the fruit obliterates only temporarily. 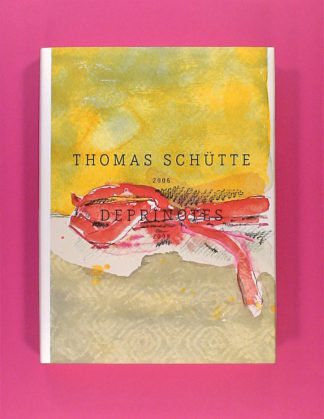