Stairs, ladders and lifts are the motifs of this Thomas Demand’s monograph. The title actually refers to so-called “staircase wit,” that concise French expression for the chagrin of missed retorts–those hapless comebacks one only ever thinks up belatedly (i.e. when already descending the stairs): “I should’ve said (fill in blank)!” etc. One of Demand’s ironic allusions to his title is a new work titled “Landing,” which shows the shards of broken Qing vases on a staircase–a mishap caused by a visitor to The Fitzwilliam Museum Cambridge in January 2006, who stumbled on his shoelaces and crashed into the three eighteenth-century vases, smashing them to pieces. As ever, Demand combines conceptual rigor and exacting craft in his painstakingly re-created sets, with their eerie edge of artifice. L’Esprit d’Escalierpresents an overview of his current work in 23 large photographs, plus a film project and an architectural installation specially prepared for his Irish Museum exhibition.

A very small imperfect spot on the cover (see photo) 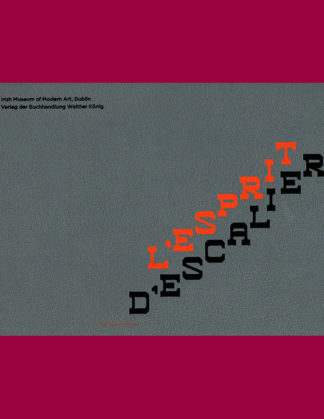