Lucian Freud (1922-2011) is one of the most influential figurative painters of the 20th century. His paintings are in every major museum and many private collections here and abroad. William Feaver’s daily calls from 1973 until Freud died in 2011, as well as interviews with family and friends were crucial sources for this book.Freud had ferocious energy, worked day and night but his circle was broad including not just other well-known artists but writers, bluebloods, royals in England and Europe, drag queens, fashion models gamblers, bookies and gangsters like the Kray twins. Fierce, rebellious, charismatic, extremely guarded about his life, he was witty, mischievous and a womanizer.
This brilliantly researched and well written book begins with the Freuds’ life in Berlin, the rise of Hitler and the family’s escape to London in 1933 when Lucian was 10. Sigmund Freud was his grandfather and Ernst, his father was an architect. In London in his twenties, his first solo show was in 1944 at the Lefevre Gallery. Around this time, Stephen Spender introduced him to Virginia Woolf, at night he was taking Pauline Tennant to the Gargoyle Club, owned by her father and frequented by Dylan Thomas; he was also meeting Sonia Orwell, Cecil Beaton, Auden, Patrick Leigh-Fermor and the Aly Khan, and his muse was a married femme fatale, 13 years older, Lorna Wishart. But it was Francis Bacon who would become his most important influence and the painters Frank Auerbach and David Hockney, close friends.
On Freud’s first trip to Paris in 1946 he met the artists Picasso, Giacometti, Andre Breton, Alexander Calder and Balthus. Next was a trip to Greece then trips to the south of France with the Graham Sutherlands. More shows followed in London and Paris and Kenneth Clark tried to buy a painting in 1947 for the Tate, Alfred Barr did buy one for MoMa in 1948, the year Freud married his first wife Kitty Garman Epstein, the daughter of the famous sculptor, Jacob Epstein. In 1952 he eloped with Lady Caroline Blackwood to Paris where they married in 1953; there were two girls from the first marriage but he had twelve other children from his many liasons.
This is an extremely intimate, lively and rich portrait of the artist, full of gossip and stories recounted by Freud to Feaver about people, encounters, and work. Freud’s art was his life—”my work is purely autobiographical”—and he usually painted only family, friends, lovers, children, though there were exceptions like the famous small portrait of the Queen. With his later portraits, the subjects were often nude, names were never given and sittings could take up to 16 months, each session lasting five hours but subjects were rarely bored as Freud was a great raconteur and mimic. This book is a major achievement, a tour de force that reveals the details of the life and innermost thoughts of the greatest portrait painter of our time. 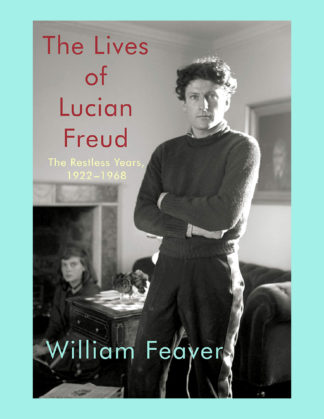