The Aesthetics of Ambiguity: Understanding and Addressing Monoculture

In The Aesthetics of Ambiguity: Understanding and Addressing Monoculture Pascal Gielen and Nav Haq argue that multiculturalism is paradoxically based on monocultural thinking. The publication explores this paradox by exploring monoculture in a variety of contemporary contexts. The book sets out to analyse monoculture using a multifaceted approach, by bringing together historical, social, cultural and ideological perspectives, using the dual role of art as tool for reconciliation and division in societies. The Aesthetics of Ambiguity gives stage to artists, thinkers and institutional practices who dare to play with the rules of a broader society and thus generate ambiguity ‘at large’. The book represents a quest for (more) ambiguity in order to avoid rigid borders or black-and-white polarities between cultures, as well as between practices of art and scientific thinking. By doing so, the artists, activists and researchers featured in this book plea for a politics and aesthetics of ambiguity to deal with the complexity of our living together on Earth. 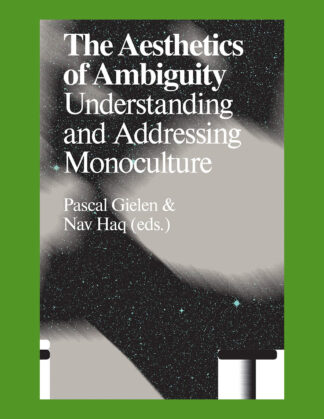 Je bekijkt nu: The Aesthetics of Ambiguity: Understanding and Addressing Monoculture €22,50
In winkelmand
0