The concept of a “group exhibition”, where the general public is invited to view new work by a collection of artists, is relatively recent in art history: it all started with the Paris Salon, first held in 1737. Those jury salons with pre-established rules lasted for about 130 years until the art world revolted. Since The Salon des Réfuses in 1863, a showcase of artworks rejected by the Paris Salon, a series of groundbreaking group exhibitions have followed, presenting works that changed not only art, but Western culture itself. Most of these pre-1960 group exhibitions, from the Impressionists’ first exhibition in 1874 to the Gutai Art Association shows in Japan and London’s Independent Group in the late 1950s, were all organized by artists. In contrast, from roughly the 1960s onward, the groundbreaking group exhibitions were curated by professional exhibition makers, from galleries to biennials. This shift brought about a change in the dialogue, where previously only artists and the public came together, there is now also a third player present. This is also the case with this group exhibition. Curated by Tim Van Laere Gallery, this exhibition includes a selection of artists whose most pronounced characteristic is their idiosyncrasy. Each of these artists has idiosyncratically constructed their own universe with their own visual language, with which they started new conversations in art history by questioning and examining its foundations. Showing both works by modern and contemporary artists, this exhibition not only reveals the individual profiles of the artists, but also allows us to re-evaluate their unique position and concept. Pablo Picasso, James Ensor, Jean-Michel Basquiat, Franz West and Ceija Stojka have left behind a body of work that continues to inspire new generations of artists to this day. Placing their work in dialogue with contemporary works not only reveals the influence of the modern artists on this generation, but also shows how their work has remained current over the years. In the opposite direction, this combination also illustrates the strength of the individual voices of this selection of contemporary artists, who can engage in conversation both with the work of each other and with the work of generations before them. 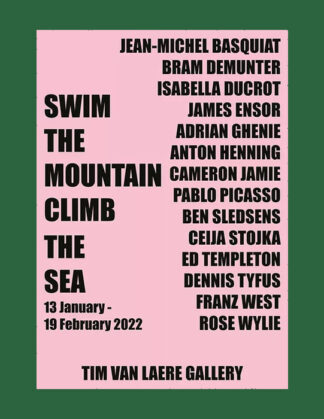