Sophie Nys: Not to be Fed, but to be Famous

In 2003, the Antwerp art centre deSingel, starts the project Curating the Library, initiated by Moritz Küng. A variety of individuals — writers, archi­tects, choreographers, artists, philos­o­phers, scientists — present their favourite books. These books are part of a steadily growing archive: Curating the Library, a mobile, mirroring sculpture designed by Richard Venlet. In 2009 Curating the Library ends. In the course of six years, 110 guest speakers have presented 1,557 books to the public.
In 2016-17, at the request of Wim Lambrecht (LUCA School of Arts) and Jan de Vylder (KU Leuven, Faculty of Architecture), the book collection and the reflective sculp­ture move to Sint-Lucas Ghent. From January to June 2017 they become the backdrop of bustling events and lectures under the heading Reading Curating the Library.
Posture Editions is invited to respond to the library and asks artist Sophie Nys to make a book to­gether. Sophie is intrigued by ‘The Life and Opinions of Tristram Shandy, Gentle­man’ by Laurence Sterne, a novel that was selected by as many as four lecturers. Sophie and Posture address a call to the students of Sint-Lucas Ghent and 75 students take part in a drawing session.
The result, ‘Not to Be Fed, But to Be Famous’: a book including 75 drawings, mirrored opposite the original cover of the book chosen, with the name of the speaker who originally introduced the book in deSingel.
This anthology is followed by a text from curator Sarah Demeuse in which she tries to find out how we can read Tristram Shandy today.
In an attempt to reconstruct the complete story of Curating the Library, the book contains the registration of all lecturers and the books they chose, a facsimile edition of the original deSingel folder.
The book ends with a survey of all lectures and performances for Reading Curating the Library.
They bear witness to the variety of events that took place in Sint-Lucas Ghent.
Neither in deSingel, nor in Sint-Lucas Ghent there was a librarian in the library. This strange fact inspired Sophie Nys to add an extra to Not to Be Fed. 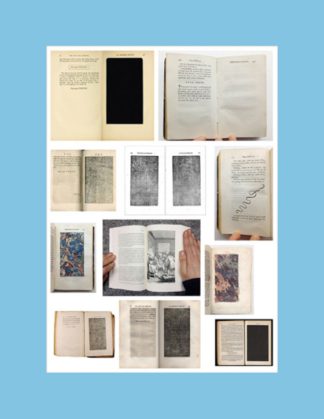