Shapes from Out of Nowhere: Ceramics from the Robert A. Ellison Jr. Collection

A comprehensive overview of 20th-century non-representational ceramics from the earliest years of the modernist revolution to the postwar period through to the present, Shapes From Out of Nowhere features an unparalleled gathering of over 150 works from New York City-based collector Robert Ellison. It explores the featured artists’ rejection of symmetrical, utilitarian forms in clay in favor of the sculptural and abstract, and challenges the boundaries between function, non-function, design, drawing, painting, sculpture and architecture. Built over a period of 40 years, this singular collection reflects the personal and discerning eye of a collector focused on the exploration of shape and form.

Ellison’s introduction to abstraction in clay was the work of George E. Ohr, whose late 19th-century creations represent the first seismic shift in a challenge to form itself. Ohr was the catalyst for this new direction in clay, and his vision foreshadows 20th-century postwar experimentation in fine art. The book showcases the sculptures by Ohr along with artists from the second half of the 20th century to the present, including seminal works by Axel Salto, Ken Price and Peter Voulkos, the progenitor of the American studio movement.

Shapes From Out of Nowhere tells this important story through the work of these key figures, but also introduces lesser known artists who transformed—and continue to push—the possibilities of the medium, including Kathy Butterly, Elisa D’Arrigo, Anne Marie Laureys and Aneta Regel. 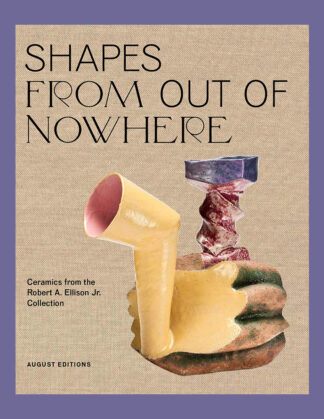 Je bekijkt nu: Shapes from Out of Nowhere: Ceramics from the Robert A. Ellison Jr. Collection €70,00
Toevoegen aan winkelwagen
0