Homosexuality still is a taboo subject in architectural history. When historical architectural personalities have lived outside the heterosexual norm, their private lives are readily shrouded in mysterious obscurity. As long as penal laws endured, social existence was constantly threatened and hiding was a necessity. Defensive strategies were needed to protect themselves. To track down these outsiders of the past, historical sources must be read queerly.
Wolfgang Voigt, until 2015 deputy director at the Deutsches Architekturmuseum (DAM) in Frankfurt/Main, and architectural historian Uwe Bresan set out on their search and present the results of their research in this book. It brings together 41 portraits from the 18th to the 20th century in North America, Europe and Palestine. The book reveals architects from the Baroque era to the modern age, surprising biographies, admirable houses and, not infrequently, intelligently designed refuges with which the protagonists protected their private lives. 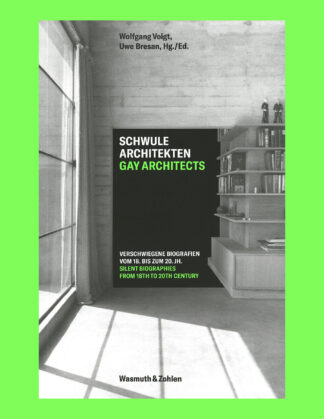