Roni Horn. It’s True That it’s Been a Long Time Since I Thought About Turtles

Roni Horn (*1955 in New York) is fascinated by the diversity of water, as is evidenced in her cycle Some Thames (2000), which features numerous individualist photographs of a constantly changing, watery surface. The artist’s enthusiasm for her second home, Iceland, plays a large role in her choice of subjects for her metal sculptures, photo installations, and abstract pigment drawings. Besides water, weather, or landscape motifs, she also focuses her attention on the people there, as in her series You Are the Weather, where the steady gaze of those portrayed seems to reverse the relationship between the observed and the observer. Horn works consistently with repetition, series, or pendants, allowing the smallest differences, nuances, or developments to become apparent. The book also documents how her major works can be experienced in continually new constellations, arrangements, and contrasts within the context of exhibitions. 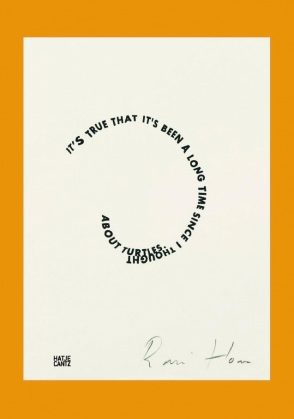 Je bekijkt nu: Roni Horn. It’s True That it’s Been a Long Time Since I Thought About Turtles €35,00
In winkelmand
0