Raphael Zuber studied architecture until 2001 at the Swiss Federal Institute of Technology Zurich (ETHZ). In the same year he opened a practice in Riva San Vitale, in 2003 his own office in Chur. His first building is the Schoolhouse and kindergarten Grono. In 2015 he completed his second one, the Apartment building in Domat/Ems. Among his important projects are the Ethnographic Museum Neuchâtel, the University Campus SUPSI in Mendrisio and the Weekend House on the Isle of Harris in Scotland. Raphael Zuber has taught at several architecture schools and is currently teaching as a guest professor at the EPFL in Lausanne.

This book is the first monograph on Raphael Zuber`s work. It presents four buildings designed between 2009 and 2016, exploring their spaces through the medium of precise computer animation. The comprehensive series of duotone stills is accompanied by stylized plans and project descriptions. An array of seemingly random yet beautiful 1:1 scans of banal objects anchors the virtual in our daily life. 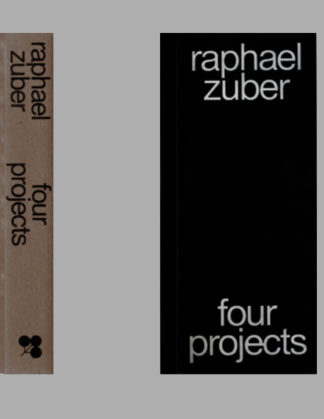