In the 1950s, a young man from Pittsburgh named Andy Warhol was earning a comfortable living as a commercial illustrator in New York City. But his ambitions went well beyond that; soon he was painting Coca-Cola bottles and filling a gallery with paintings of Campbell’s Soup cans. He certainly wasn’t the first to make a Pop work, but Warhol soon became a brand name himself, synonymous with the new art form that embodied everything youthful, subversive, bright and fresh.
From the proto-supermodel Twiggy rocking false eyelashes and a Union Jack dress in Swinging London to Eero Aarnio’s trippy, enveloping Ball chair, Pop seeped into fashion, furniture and product design so profoundly that it is hard to separate the look and vibe of the 1960s and ’70s from the art of the era. No doubt to Warhol’s giddy delight, Pop didn’t just draw from pop culture, it became pop culture.
After this first wave, the movement never really went away. Each succeeding generation of artists and designers has revived Pop’s life force while also giving it new direction. Indeed, with Instagram and TikTok on ubiquitous Pop-colored iPhones, social media is to today’s adherents what advertising and Hollywood were to Pop artists sixty years ago.
Following our successful Travel series, Assouline introduces the Style series, spotlighting some of the most iconic art movements and design styles, revealing their historical impact and continuing influence on our culture today. This colorful volume brings together dynamic images from diverse eras and media to express the energy and exuberance of sixty years of Pop Art Style. 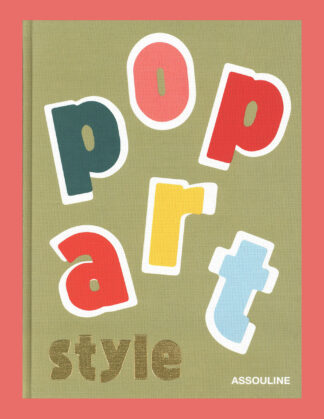