The prodigious work of Pierre Guariche (1926-1995) goes hand in hand with France’s Trente Glorieuses,’ as well as the enormous administrative and societal changes of the 1980s.
Trained by Marcel Gascoin, Guariche began his career in 1951 as an independent decorator-designer. For almost twenty years, he designed innovative furniture in collaboration with avant-garde manufacturers, such as Airborne, the Galerie MAI, Meubles TV, Steiner, Les Huchers-Minvielle and Meurop, as well as creating lighting fixtures with Disderot. Working with the latest materials, revising utilitarian designs, he founded the Atelier de Recherches Plastiques (ARP) in 1954, with Michel Mortier and Joseph- André Motte, the first French design collective ; it would last for three years. From the 1960s, he concentrated on interior architecture, applying his mastery of space and materials to many projects. He was involved in work on Firminy after Le Corbusier’s death and collaborated with architect Michel Bezançon on the creation of La Plagne ski resort and with Jean Dubuisson in Bandol. Commissioned for many private and public projects, Guariche fitted out the prefecture and the departmental council of Essonne in Évry and the regional court of Créteil.
Drawing on previously unpublished archives, this book looks at more than two hundred interiors, almost as many pieces of furniture, and an exceptional range of lighting fixtures that set the standard for modern lighting. TWEETALIG: FRANS/ENGELS 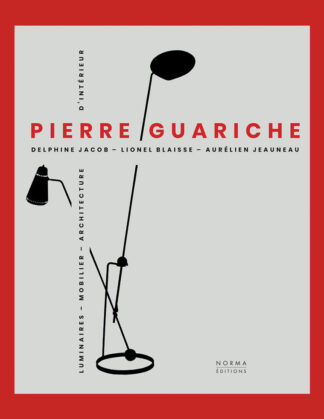