Peter Fischli and David Weiss are Swiss artists who first began working together in the late 1970s. Their sculpture, video and photographic works all generate a unique atmosphere of concentration and relaxed pleasure. The mood of their work ranges from the humorous – a pair of clay figures, for example, titled Mick Jagger and Brian Jones go home satisfied after composig ‘I Can’t Get No Satisfaction’ – to the banal – a photographic series devoted to Airports – and even the apparently invisible – their Untitled installation simulating, through minutely detailed polyurethane sculptures, an unfinished exhibition site.

While Fischli and Weiss occupy the international art world’s most prestigious levels – representing Switzerland in the 1995 Venice Biennale and returning eight years later to win the Leone d’Oro prize for their slideshow Will Happiness Find Me? – they remain an unpredictable force at the very cutting edge of new art. This is the first true monograph on this extraordinary pair, who have exhibited worldwide and whose solo exhibitions include the Centre Pompidou, Paris (1992), the Museum of Contemporary Art, Los Angeles (1988), and Tate Modern, London (2006). 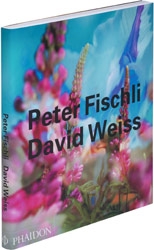