Pekka Pitkänen (1927 -2018) was one of the most significant Finnish architects of the post-war period. He is known as a master of concrete and a steadfast adherent of the modernist approach to architecture.
The Chapel of the Holy Cross (1967) in Turku is frequently regarded as Pitkänen’s principal work. From the 1950s to the 1980s, he built numerous residential and commercial buildings in Turku, often in collaboration with the construction company Urakoitsijat Oy. Together with Ola Laiho and Ilpo Raunio, he designed the extension of the Finnish Parliament (1978). Late in his career, he focused on public buildings, his last being Turku Courthouse, completed in 1997.
This book is the first English-language monograph dedicated to Pekka ­Pitkänen. Based on extensive archival research, interviews, and ­Pitkänen’s own unpublished memoirs, it presents a singular insight into the life and work of a prolific yet surprisingly little-known modernist architect. 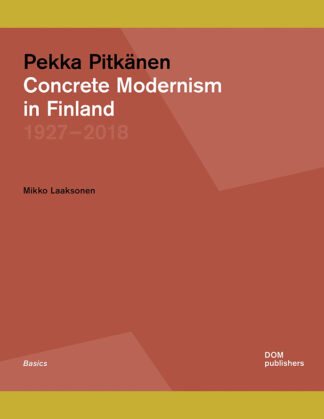