Out of Order: The Collages of Louise Nevelson

“Despite occupying a significant portion of Nevelson’s creative output, her collages still today remain largely unexplored, with only a few publications and essays dedicated to their particular study and analysis in some remove from the sculptures. The fact that this body of work was exhibited only on rare occasions during her lifetime, and always alongside sculpture, is undoubtedly a delaying factor in the emergence of a more established scholarship on the subject. All the same, Nevelson was often quoted commenting that “the way I think is collage,” and already by 1960, Jean Arp declared in one of his poems that “Louise Nevelson has a grandfather, probably without knowing it: Kurt Schwitters,” thereby positioning her work within the lineage of avant-garde collage in modern art.”—Yuval Etgar
Published on the occasion of Out of Order: The Collages of Louise Nevelson, a survey exhibition dedicated to Nevelson’s research on collage at Gió Marconi gallery, the book gathers an extensive collection of bidimensional works of the American artist analyzed through essays by Yuval Etgar and Pia Gottschaller, and a conversation between Gió Marconi and Maria Nevelson. 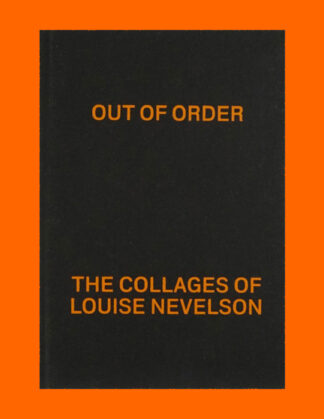