This long-awaited new edition of the Catalog raisonné of the painted work of Nicolas de Staël is the third since 1968, then established by the painter’s widow, Françoise de Staël, who died in 2012. Revised and augmented by Marie du Bouchet and Gustave de Staël , it takes again the out-of-print version of 1997 published by Editions Ides et Calendes, renewing it with enriched notices of the numerous exhibitions, books and sales of works that have brought Nicolas de Staël’s painting to life since then.
A long research work has made it possible, thanks to Collectors, Auction Houses, Galleries and Museums, to bring together a very large number of color reproductions. We are therefore particularly happy today to be able to publish a full-color catalog raisonné for the first time.
The body of work today consists of 1,120 paintings. Nineteen paintings were added, including 7 which have been recognized since 1997 as being by Nicolas de Staël and 7 sketches which were already included in the first catalog raisonné in 1968, then withdrawn by Françoise de Staël in the edition. from 1997. It was decided to reinstate them in order to produce an exhaustive catalog of the work.
Also for the first time, this catalog raisonné is appearing in English, which reflects the international presence of the work. As a large number of paintings are held in American and British private or museum collections, the choice of English for this publication seemed obvious to us. The texts which are part of the founding writings of Nicolas de Staël’s work, such as that of André Chastel, Roger van Gindertael, Germain Viatte or Anne de Staël will therefore be accessible to amateur readers and foreign collectors. We are grateful to Madame Eliza Rathbone (recognized specialist in the painter’s work) for writing an introduction which traces with great precision the history of Nicolas de Staël’s fame in the United States.
This “Catalog raisonné of paintings” echoes the “Catalog raisonné of works on paper” published in 2013 by Editions Ides et Calendes. 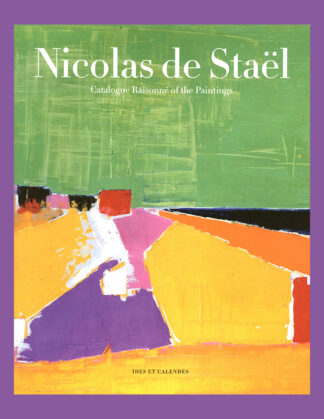