Monteverdi: A Village in Tuscany

Monteverdi is a village in val d’Orcia, one of the most beautiful countrysides of Tuscany and declared a World Cultural Heritage site by UNESCO. This book illustrates the extraordinary work of restoration and transformation which has been carried out. This charming medieval village has been saved from its state of abandon and neglect through the care and sensibility by Ilaria Miani, architect and interior designer, who has returned it to its original lovely appearance and supported by Michael L. Cioffi, an American lawyer who fell in love with Bella Italia. This love developed while studying the classics at the University of Notre Dame – from Virgil to Cicero and up through the great literature, philosophy, science and art of the Renaissance. Ten years ago he stepped into the village of Castiglioncello del Trinoro in Tuscany. Although the village was physically dilapidated, he found in her old bones, perched above the rolling fields of Tuscany, the story of a rich history, culture and land. Seduced by this story and propelled by love, he began to restore and preserve the village, giving birth to the vision of Monteverdi, now fully realized, as seen in the pages of this book. 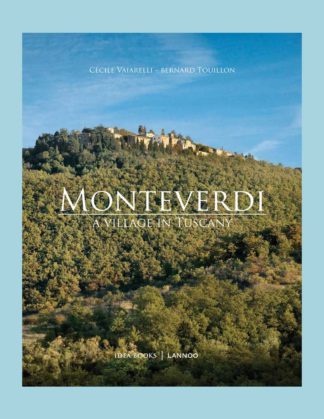