Monospaced fonts are fascinating! Mono Moment is aimed at type designers typographers and designers, but also at people who are dealing with type design for the first time. The publication thus becomes a reference book and source of inspiration!

Friedrich Nietzsche was probably one of the first to feel the aesthetic appeal of monospaced typefaces. Since he started writing with a typewriter, typefaces, and punctuation have been important to him. In the meantime, we encounter monospaced typefaces regularly in everyday life: in design and in art, in coding, on tax records, or on our ID. If you take a closer look, you will encounter non-proportional typefaces more often than expected.

Due to the increase in typeface production over the past few decades, almost every well-developed font family also has a mono or semi-mono cut. When searching for the word “monospace” on the World Wide Web, countless entries can be found in addition to the results such as “I am looking for a beautiful monospaced font,” “Top Ten Monospace Fonts,” or “Best Monospace Fonts for Coding.” At a time when it has never been easier to design and publish typefaces, this book provides a good orientation to monospace! 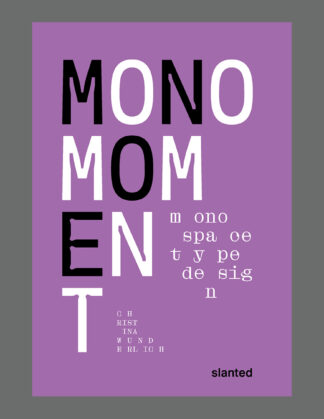