For the first time in the US, Lucio Fontana Ambienti Spaziali presents a substantial number of the spatial environments conceived by the artist between 1948 and 1968, works that can be regarded as forerunners of the environments created by figures such as Allan Kaprow and Robert Irwin and the light art of the likes of Dan Flavin and Bruce Nauman.
Six environments are included in the exhibition: Spatial Environment in Black Light, 1948-49, first shown at the Galleria del Naviglio, Milan, in 1949; the Neon Structure for the 9th Milan Triennale, 1951, created for the grand staircase of the Palazzo dell’Arte in Milan; Chandelier, 1959-60, executed for the Cinema Duse in Pesaro; Spatial Environment, 1967, realized for the exhibition Lo spazio dell’immagine in Foligno in 1967; Spatial Environment, 1967, mounted for the first time at the Galleria del Deposito, Genoa; and Spatial Environment at Documenta 4, Kassel, 1968.
The environments are both the natural conclusion of his opening up of space through holes and cuts and the basic key to its understanding, not just in painting and sculpture, but in architecture too. 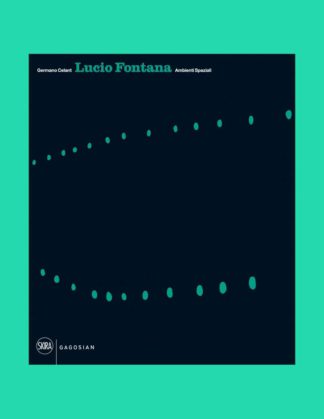