kyklàda press: Vol.3/4. Public Health in Crisis (set of 4 books, order only once!)

The booklets are online only available in sets of four (8€ each) PLEASE ORDER JUST ONCE / 1 TIME !

kyklàda.press is a small imprint, producing a series of texts resonating with phenomena in the Aegean Archipelago. kyklàda.press is a book project driven by a trans-disciplinary team directed by David Bergé, exploring critical and experimental positions in writing. With each volume in this series, we are slowly forming a catalogue of liquid forms of modernity: corporeal bodies – historical and actual, real, and imaginative.

Through navigation, our westernized sense of perspective has established a common horizon, simplifying islands as visual spots at the surface of the sea. Islands are not exotic entities alone in the sea waters. Islands remain interconnected with the mainland and each other, from the top of the mountains to the hidden topographies of the sea bed: a myriad of creatures and non-organic matter which lives in constant symbiosis with water; tectonic plates, fossil fuel pipes, and data cables.

Vol. 3. Public Health in Crisis: Confined in the Aegean Archipelago

Epidemics and pandemics undermine societies and highlight the vulnerability of relations people have created to the land, other species, and each other. This book presents fragments of disease management in the Mediterranean from the 15th-century onwards and in the Aegean Archipelago in the last two centuries. From religious to medical approaches to the Bubonic Plague, through the creation of lazarettos, to the famine in occupied Syros, to ghost ships drifting on the Mediterranean: citizens are forced to avoid citizens. Public health in crisis: confinement versus mobility, awakening memories of totalitarian regimes.

The production of this book was supported by Goethe-Institut Athens 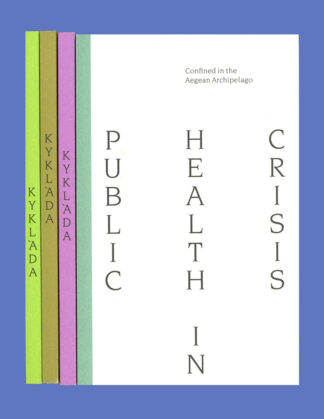