Happiness by Design: Modernism and Media in the Eames Era

For the designers Charles and Ray Eames, happiness was both a technical and ideological problem central to the future of liberal democracy. Being happy demanded new things but also a vanguard life in media that the Eameses modeled as they brought film into their design practice. Midcentury modernism is often considered institutionalized, but Happiness by Design casts Eames-era designers as innovative media artists, technophilic humanists, change managers, and neglected film theorists.

Happiness by Design offers a fresh cultural history of midcentury modernism through the film and multimedia experiments of Charles and Ray Eames and their peers—Will Burtin, László Moholy-Nagy, and György Kepes, among others—at a moment when designers enjoyed a new cultural prestige. Justus Nieland traces how, as representatives of the American Century’s exuberant material culture, Cold War designers engaged in creative activities that spanned disciplines and blended art and technoscience while reckoning with the environmental reach of media at the dawn of the information age.

Eames-era modernism, Nieland shows, fueled novel techniques of culture administration, spawning new partnerships between cultural and educational institutions, corporations, and the state. From the studio, showroom floor, or classroom to the stages of world fairs and international conferences, the midcentury multimedia experiments of Charles and Ray Eames and their circle became key to a liberal democratic lifestyle—and also anticipated the look and feel of our networked present. 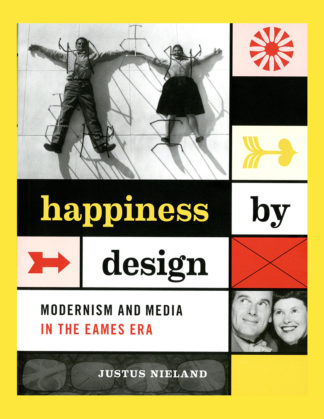 Je bekijkt nu: Happiness by Design: Modernism and Media in the Eames Era €39,95
In winkelwagen
0