Good Entertainment: A Deconstruction of the Western Passion Narrative

In Good Entertainment, Byung-Chul Han examines the notion of entertainment—its contemporary ubiquity, and its philosophical genealogy. Entertainment today, in all its totalizing variety, has an apparently infinite capacity for incorporation: infotainment, edutainment, servotainment, confrontainment. Entertainment is held up as a new paradigm, even a new credo for being—and yet, in the West, it has had inescapably negative connotations. Han traces Western ideas of entertainment, considering, among other things, the scandal that arose from the first performance of Bach’s Saint Matthew’s Passion (deemed too beautiful, not serious enough); Kant’s idea of morality as duty and the entertainment value of moralistic literature; Heidegger’s idea of the thinker as a man of pain; Kafka’s hunger artist and the art of negativity, which takes pleasure in annihilation; and Robert Rauschenberg’s refusal of the transcendent.
The history of the West, Han tells us, is a passion narrative, and passion appears as a killjoy. Achievement is the new formula for passion, and play is subordinated to production, gamified. And yet, he argues, at their core, passion and entertainment are not entirely different. The pure meaninglessness of entertainment is adjacent to the pure meaning of passion. The fool’s smile resembles the pain-racked visage of Homo doloris. In Good Entertainment, Han explores this paradox. 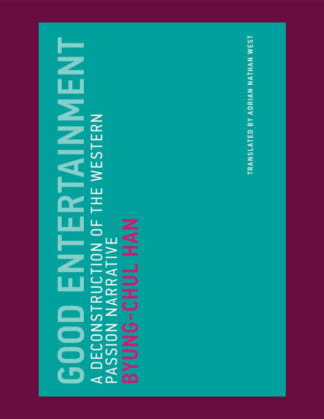