Gerhard Richter: Painting after the Subject of History

In this first full-scale monograph in English on the German painter Gerhard Richter, the distinguished art historian Benjamin H. D. Buchloh maps the unfolding of Richter’s ever more complex and contradictory lifework. A painter in an age that disdains painting, a German confronting the impossibility of representing the historical trauma inflicted by his country upon the world between 1933 and 1945, a European artist in dialogue with his American counterparts, Richter (b. 1932) is shown by Buchloh to be a unique and singular artist, outside and beyond every other formation contemporaneous with his own development and evolution.
What emerges from Buchloh’s detailed analysis of Richter’s key works is a far more complex set of painterly strategies than has been previously assumed, strategies that have inverted and relativized all the principles of the modernist and even the postmodernist painterly aesthetic. In a series of essays that proceeds chronologically, Buchloh begins with Elbe (1957), seeing it as a foundational moment in Richter’s confrontation with Socialist Realism, and goes on to consider such works as October 18, 1977 (1988), the series of representational photo-based paintings of Baader-Meinhof members; Richter’s glass works; and the late group of Birkenau Paintings (2014). Richly illustrated in color, dense with insights that represent half a lifetime of engagement with Richter’s work, this book will stand as the definitive, essential examination of a major contemporary artist. 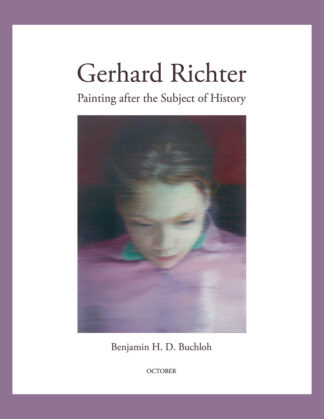