At the peak of the 1968/69 students’ riots at American Universities, Robert Venturi and Denise Scott Brown, together with Steven Izenour, pursued their Design and Research Studio on the topic of Las Vegas at Yale School of Architecture. The results of this were condensed into the book Learning from Las Vegas that became a classic almost instantly upon its first publication in 1972. The treatise excited the 1970s architecture world and has remained influential to architects, teachers and theoreticians to the present day.

Some forty years later, Eyes that Saw: Architecture after Las Vegas offers a richly illustrated collection of essays by renowned scholars of art and architectural history, eminent architects, and artists, investigating Learning from Las Vegas and its heritage from various perspectives. Each chapter builds on the knowledge of the radical influence it had on architecture and urban design, visual art, and even on history more generally. Published alongside are documents from the Venturi, Scott Brown & Associates Archive at the University of Pennsylvania, as well as an illustrated chronology of the resonance in international media following the publication of Learning from Las Vegas in 1972. 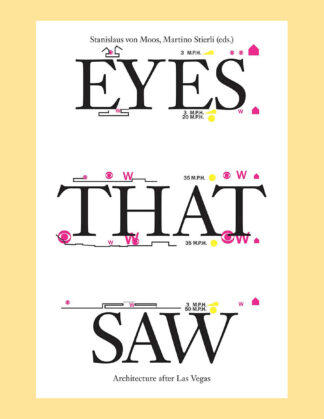