This catalog was published on the occasion of Edward Lipski’s fifth solo show at the gallery. In this exhibition Lipski showed a new body of works that encompass the same hybridity as Lipski’s heritage rooted in Paraguay and Ukraine. On the one hand these works reference thematics that are close to the animal kingdom, which we often find in tribal art, while on the other hand we recognize a stylistic reference towards the Modernistic language of Sovjet sculpture.
Lipski’s artistic practise is one filled with oppositions. The artist is interested in sculpture from all ages and cultures, and particularly in how images can evoke meanings, as well in the past, the present as the future. By researching the way visual concepts have altered throughout history, Lipski has fused different sculptural elements into a new visual language that crosses over the barriers of time and cultural appropriations. We can recognize elements from Imperial bustes in Monkey Head (2021), a reference to Brancusi’s kiss in Amoeba (2021) and a reference to Modernistic monuments in Hand (2021). Like a ‘cultural tourist’ Lipski observes the characteristics from different cultures and merges different aspects to invent a new narrative, which can only exist in an in-between space. His interest ranges from the seriousness of historic output to the ‘stereotyping’ of cultures, to even science-fictional tales based on certain cultural phenomena.
His sculptures carry a strange duality where they feel ancient and futuristic at the same time. Cloth Monkey (2021) is a very fine example thereof. The rough edges and angular structure which reduces the monkey to an abstract shape clearly reminiscence the style of the Modernistic Sovjet architects and sculpturs, while the monkey itself refers to our primitive brain. The Cloth Monkey also carries a reference to the experiments on mother-infant relations by Harry Harlow in the 1950’s. This reveals yet another interest of the artist, where artificial objects – in this case the wire monkey – substitutes reality.
The multifacetedness of his sculptures goes even further through his choice of materials. Concrete and steel are materials that shaped the modernist era, while his application of it – where he reveals the faults of the concrete – is a very natural process which comes closer to the materiality of stone, a very primal material used for sculptures. Just as certain images from the past could radiate a sort of magic, Lipski often makes connections with the rituals or mystical powers of an object. This is also present in his new sculptures by his addition of magnetite to the cement mixture, which adds a magnetic field to the sculptures. 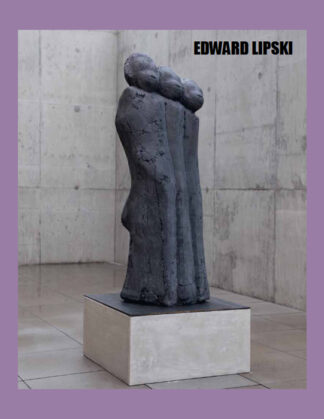