Donald Judd (1928–1994) was one of the most influential American artists of the postwar era. Beginning in the 1960s, he developed new ideas about art—in both his works and writings—that challenged many of modernism’s core tenets by resisting the categories of painting and sculpture. Judd described this work as “specific objects.” Critics labeled it minimalism. Perhaps because Judd’s own writings provide a discursive framework for his project, some of the monographic essays on his art are not widely known. This volume collects critical and scholarly writings on Judd, examining his work as both artist and critic.
Spanning all periods of Judd’s career, the essays gathered in this volume explore questions of abstraction, phenomenology, political engagement, labor, urban planning, and conservation. Written by a range of artists, architects, art historians, critics, and curators, these texts make clear Judd’s relevance for a wide array of fields and disciplines, and situate him as a pivotal figure in contemporary art. They include an early consideration of Judd’s work by Robert Smithson, a text on Judd’s later works by curator Lynne Cooke, two essays by the art historian Rosalind Krauss, and an appraisal of Judd’s writings by the artist Mel Bochner. 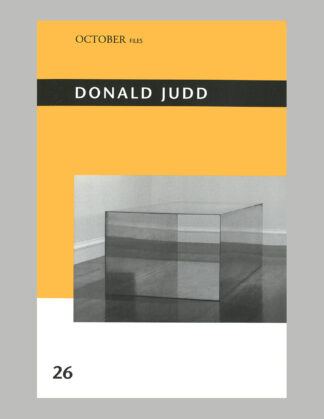