The first book dedicated to these pivotal early works on paper, David Hammons: Body Prints, 1968–1979 brings together the monoprints and collages in which the artist used the body as both a drawing tool and printing plate to explore performative, unconventional forms of image making. Hammons created the body prints by greasing his own body―or that of another person―with substances including margarine and baby oil, pressing or rolling body parts against paper, and sprinkling the surface with charcoal and powdered pigment. The resulting impressions are intimately direct indexes of faces, skin, and hair that exist somewhere between spectral portraits and physical traces. Hammons’ body prints represent the origin of his artistic language, one that has developed over a long and continuing career and that emphasizes both the artifacts and subjects of contemporary Black life in the United States.

More than a half century after they were made, these early works on paper exemplify Hammons’ celebration of the sacredness of objects touched or made by the Black body, and his biting critique of racial oppression. The 32 body prints highlighted in this volume introduce the major themes of a 50-year career that has become central to the history of postwar American art. The book features a conversation between curator and activist Linda Goode Bryant and artist Senga Nengudi, as well as a photo essay by photographer Bruce W. Talamon, who documented Hammons at work in his Los Angeles studio in 1974.
Born in 1943 in Springfield, Illinois, David Hammons moved to Los Angeles in 1963 at the age of 20 and began making his body prints several years later. He studied at Otis Art Institute with Charles White and became part of a younger generation of Black avant-garde artists loosely associated with the Black Arts Movement. He moved to New York in 1978. 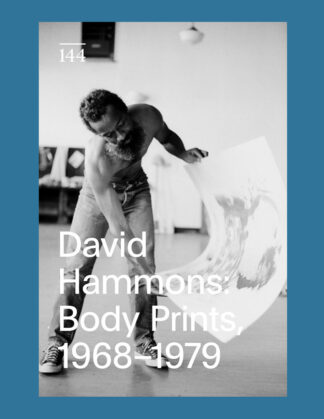