Dan Graham is one of the most significant figures to emerge from the 1960s moment of Conceptual art, with a practice that pioneered a range of art forms, modes, and ideas that are now fundamental to contemporary art. The thrust of his practice has always pointed beyond: beyond the art object, beyond the studio, beyond the medium, beyond the gallery, beyond the self. Beyond all these categories and into the realm of the social, the public, the democratic, the mass produced, the architectural, the anarchic, the humorous. Graham’s early work, Homes for America—a series of snapshots of suburban New Jersey tract housing accompanied by short parodic texts, made as a page layout for Arts magazine—announced a critical art grounded in the everyday, and it merged the artist’s interest in cultural commentary with art’s most advanced visual modes. His 1984 “video-essay” Rock My Religion traced a continuum of separatism and collective ecstasy from the American religious sect the Shakers to hard-core punk music.

This volume, which accompanies a major retrospective organized by the Museum of Contemporary Art, Los Angeles, offers the first comprehensive survey of Graham’s work. The book’s design evokes magazine format and style, after Graham’s important conceptual work from the 1960s in that medium. Generously illustrated in color and black and white, Dan Graham: Beyond features eight new essays, two new interviews with the artist, a section of reprints of Graham’s own writing, and an animated manga-style “life of Dan Graham” narrative. It examines Graham’s entire body of work, which includes designs for magazine pages, drawing, photographs, film and video, and architectural models and pavilions. 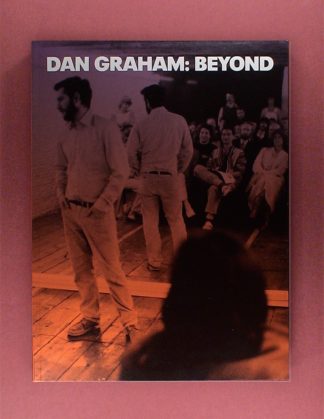