City of Cinema traces film’s evolution from an obscure entertainment to the most powerful art form of the 20th century. Placing cinema in the context of 19th-century Parisian visual culture, this book brings together posters, paintings, studio and documentary photography, and film stills that evoke Paris as a site of consumption, demonstrate early cinema’s relationship with technology and the fine arts, and highlight local and global spaces of film production. It also examines the aspects of 19th-century visual culture that gave rise to cinema as a quintessentially modern medium with an eager audience. Aligning with French beliefs that the nation’s culture would be democratized through consumption, cinema reinforced a set of assumptions about French cultural and political authority and disseminated these ideas to the rest of the world.
Presented here are images of and from the street by Jean Béraud, Charles Marville, Jules Chéret and Auguste and Louis Lumière; the technological experimentation of Loïe Fuller, Émile Reynaud and Georges Méliès; and the plein-air observations of Camille Pissarro and the staged artifice of Jean-Leon Gerome—all of which can be considered alongside the prototype film studios of Georges Méliès, Gaumont and Pathé.
At the dawn of the 20th century, cinema is as much, if not more, a way of appropriating the world. Through arresting images and incisive texts, this book examines the origins of cinema and its position as a global medium. 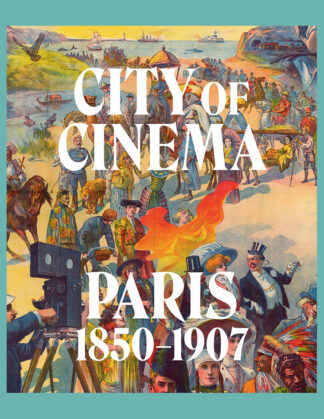