Christophe Plantin & The Officina Plantiniana (1555-1655): A Century of Typographic Excellence

Native of touraine, Christophe Plantin / Christoffel Plantijn (ca 1520-1589), settled about 1549 in Antwerp, which was already a major hub of international commerce. In 1555, he established the foundations of the largest printing company known during the Ancien Régime in Europe. Business genius and talented typographer, he turned his officina, which adopted ‘The Golden Compasses’ as its emblem, into one of the most important editorial supporters of the Counter- Reformation, though this did not prevent him from engaging in clandestine activities. From the beginning, Plantin’s production was distinguished by its elegant style. His correspondence, part of the exceptionally well-preserved archives of the business, testily to his ample commercial ambitions and the utmost care given to the conception of books. The editorial strategies and production requirements of the exceptional Plantin-Moretus printing-house, during its first century of activity, constitute the heart of this book. It shows how Christophe Plantin and his successors transformed the aesthetic of the Renaissance book and introduced the baroque notion of page layout by exploiting typographic and novel decorative materials, promoting illustration with copper engravings and appealing in a favourable manner to the painter Peter Paul Rubens and talented illustrators and engravers (Pieter van der Borcht and the Wierix Brothers, Charles de Mallery and Cornelis Galle). 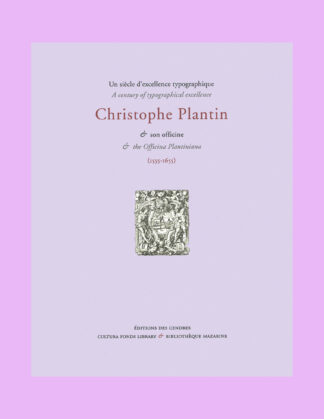