Cecil Beaton (1904–80) was one of the most celebrated British portrait photographers of the 20th century, so renowned for his images of celebrities and high society that his own name has become synonymous with elegance, glamour and style. In the 1920s and ’30s, Beaton used his camera, his ambition and his larger-than-life personality to mingle with a flamboyant and rebellious group of artists and writers, socialites and partygoers whose spirit and style cut a dramatic swathe through the epoch. Canonizing the era’s “Bright Young Things” in his distinctive brand of opulent studio portraiture, Beaton worked his way up from middle-class suburban schoolboy to glittering society figure.

This miniature cocktail book features a delightful array of recipes inspired by the decadent drinks of Beaton’s youth, and the fabulous friends and celebrities whom he photographed. Period classics such as the Hanky Panky, Manhatten, Negroni and Sidecar are given contemporary twists by the Head Bartender and Mixologist of the world famous Claridge’s Hotel in London, which played host to some of the most extravagant Bright Young gatherings. It is illustrated with the artist’s own photographs and the witty and distinctive drawings he produced throughout his life, recording people, travels and experiences, which were featured in Vogue magazine. A must-have for every well-appointed bar cart, Cecil Beaton’s Cocktail Book brings to life a deliriously eccentric, glamorous and creative era. 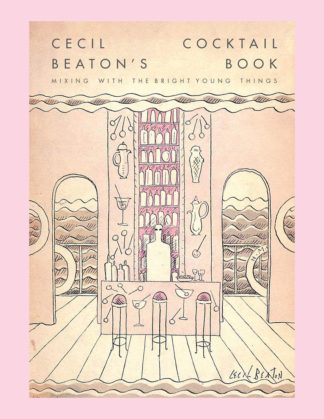