This beautifully illustrated volume spans the breadth of Palermo’s brief but significant career and explores each phase, beginning with objects and paintings created shortly after he graduated from Joseph Beuys’s class at the Düsseldorf Art Academy in the early 1960s and culminating with paintings he produced during his last years in both Germany and New York City.

Palermo’s oeuvre is customarily divided into four principal groupings: the Objects; the Cloth Pictures (Stoffbilder), the in situ Wall Paintings and Drawings, and the late Metal Pictures, including the epic To the People of New York City (1976), now in the collection of Dia Art Foundation. Blinky Palermo also addresses the artist’s works on paper, including watercolors, sketches, preparatory studies, and prints that he made throughout his career.

Essays by distinguished authors position the artist’s work in relation to postwar American art and culture, which he greatly revered. Topics include the influence of the American milieu on the Metal Pictures; space and time in the Wall Drawings and Paintings; and the insights into Palermo’s concerns and process afforded by his works on paper. The most comprehensive volume on Palermo’s career to date, this important book offers a rare opportunity to explore in-depth the work of a remarkably innovative artist, pointing to Palermo’s relevance and influence on a new generation of artists. 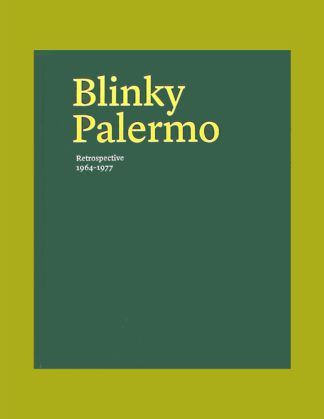