Tim Van Laere Gallery presents its fourth solo exhibition by Ben Sledsens, Under The Tree Distant Sea. Sledsens (b. 1991, Antwerp) combines his profound knowledge of the visual tradition with his own mythology. In his large-scale canvases he shows us fragments of his imaginary world, a utopia in which he himself wants to live.

With his great pictorial insight, Sledsens composes a new world in which he enlarges, emphasizes and idealizes certain elements from nature and his everyday surroundings, so that they surpass our realistic perception. An example of this can be found in his landscapes, such as the large-scale work In the Yellow Forest, 2022, where he depicts a forest bathed in an overwhelming yellow light. Here he has magnified the influence of light on our perception of color to such an extent that it results in a completely monotonous yellow landscape. His play with color and reinterpretations of the landscape remind us of artists such as Henri Matisse, Pierre Bonnard, James Ensor, Claude Monet, Henri Rousseau and Pieter Brueghel the Elder. Although at first glance his landscapes, portraits, historical and everyday scenes often have an idyllic feel, there is always a certain tension and mystery hidden in his scenes as well. Sledsens often builds his compositions around a moment of climax with an open beginning and end. By reusing motifs, themes and objects, he creates an intriguing puzzle of references and builds a recognizable, coherent, romantic and utopian oeuvre. He makes intensive use of the work of his famous predecessors – he draws on various traditions and thus takes inspiration from them in terms of style, technique, formal language and image rhetorical motifs. The way in which he does this, however, is quite remarkable and typical of his artistry: Sledsens looks and studies a lot in order to investigate his own painterly questions. Those questions are therefore central to the artist’s oeuvre, with the subjects functioning as an alibi for exploring those issues. With his intensive work rhythm and research, he makes all of this his own and thus brings forward a very personal visual language.

In his oeuvre, Sledsens plays with the classical genres of painting with a great preference for landscapes and portraits. Sledsens hybridizes the genres and thus rethinks the classical regulations. His inhabited landscapes are animal portraits and his portraits are carefully constructed compositions in which he calculatedly searches for the right characteristics to shape his characters in the same way he shapes a landscape. In his hunting scenes, too, he introduces a new perspective to the genre in which he has the role of the hunter taken by a young woman, referring to his muse, his girlfriend Charlotte De Geyter, who as a fashion designer heads her own label Bernadette. Also in the work Catching Fish, 2021-2022, Sledsens paints a determined woman who defies the whims of the sea to reach her goal. In doing so, he breaks centuries-old stereotypes and gives a powerful role to women within his universe.

In this exhibition, Sledsens is also showing a series of sculptures for the first time. With these he explores the material and technical possibilities of ceramics in an autonomous way. As in his paintings, Sledsens is exploring new ways of expressing himself artistically. There is a long history of the form and function of the vase in almost all developed cultures, and often ceramic objects are the only artistic evidence left from vanished cultures. Sledsens is very aware of the rich history that painted vases carry and also transforms it into his own visual language. 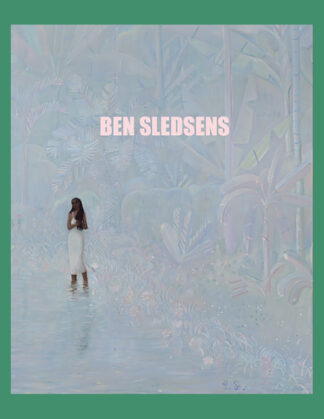