Winkelmand bekijken “Architectural Guide The South of Russia: Buildings and Projects of the Soviet Avant-Garde 1922–1936” is toegevoegd aan je winkelmand.

Architectural Guide The South of Russia: Buildings and Projects of the Soviet Avant-Garde 1922–1936

The Soviet avant-garde architecture of the 1920s to the mid-1930s has increasingly been attracting attention from researchers worldwide. Yet, in spite of this, entire regions remain unstudied. One of these is the south of Russia. Based on extensive research, this guidebook aims to correct the omission. It explores Russia’s South and North Caucasus federal districts: Astrakhanskaya, Volgogradskaya, and Rostovskaya regions, Krasnodarsky kray, Crimea, Kalmykiya, Mineralnye Vody, Dagestan, Kabardino-Balkariya, Karachaevo-Cherkesiya, Severnaya Osetiya, and Chechnya.
During the Second World War, the south of Russia was the scene of fighting and mass destruction. Post-war reconstruction saw many buildings redesigned in the neoclassical style and the loss of an entire stratum of avant-garde structures. Since the end of the USSR, the way the surviving buildings have been used and run has been equally destructive. For this reason, the structures examined here are divided into two categories: those that have survived and those that have been lost forever. This volume enables readers to view 100 Soviet avant-garde buildings with their own eyes. 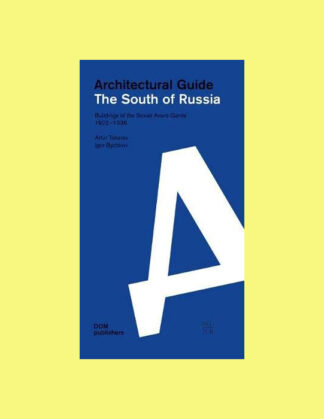 Je bekijkt nu: Architectural Guide The South of Russia: Buildings and Projects of the Soviet Avant-Garde 1922–1936 €38,00
In winkelmand
1