Anri Sala’s work is often about obscurity – obscurity of images but also of language and experience – which can render it both vexingly subtle and uncomfortably immediate. In the video Ghostgames (2002), translucent crabs scuttle away from a flashlight beam on a dark beach. The horse in time after time (2003) stands beside a busy motorway as headlights from passing cars draw perilously nearer. In other instances, this obscurity can be simply beautiful, like the strobe light reflecting off a reverberating cymbal in Three Minutes (2004) or the game of football played by the children in Missing Landscape (2001).

When Sala confronts the history and current events of his native Albania, he does so with the same subtle immediacy. The video Intervista (1998), for example, is equal parts documentary, memoir and mystery. It depicts Sala’s search for the lost sound reel from a historical interview with his mother at the 1977 Albanian Youth Congress. Finally, after enlisting lip-readers to supply the missing dialogue, Sala plays it for his mother, who reacts with shock at the words of her younger self, words not so much her own as the Communist Party’s. During the course filming of Intervista, the Albanian economy collapsed, unleashing civil unrest across the country. The film ends with Sala’s mother reflecting on her youthful beliefs, now tempered by experience: ‘I think we’ve passed on to you the ability to doubt. Because you must always question the truth.’

Working in a range of media – including video, photography and installation – and having been raised in Tirana, educated in Paris and now settled in Berlin, Anri Sala represents a truly contemporary international vision. The impact of his work – featured at the world’s top venues and exhibitions, including Manifesta (2000) and the Venice Biennale (1999, 2001 and 2003) – endorses Sala’s conviction that art can transcend cultural references without losing any of its specificity nor, indeed, its power. 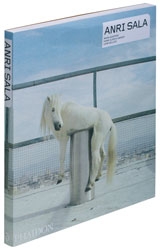