Last October, the young Antwerp comic maker and illustrator Ward Smits passed away. Unfortunately, the title of his last graphic novel, published posthumously, seems to be a harbinger of his untimely death.

Synopsis: When his relationship and music career come to an end simultaneously, 30-year-old Gus returns for the first time in a long time to his hometown, the place he had vowed never to return as a teenager. It seems as if time has stood still since his departure. The television set in the corner of the local bar is still playing the same program, the bar talk also sounds like a rebroadcast. The young people Cas, Frank & Saul, spend their days between the skate park and the rehearsal room. They dream aloud of a success like that of their great rock hero Gus Jenssen, unsuspecting that he is stinking a few blocks away in his brother’s seat. Just when it seems like everything will stay the same forever and ever, a night follows that changes everything… Or seems to change… Or not?

In “I come a long way, but will not stay long”, Ward Zwart and Enzo Smits build on themes whose blueprints could already be found in the short stories of “Wolves” (Bries, 2016). Overdriven guitars accompany dreamy pencil drawings and take you into a cinematic story about what it means to leave, but also to come home. IN DUTCH! 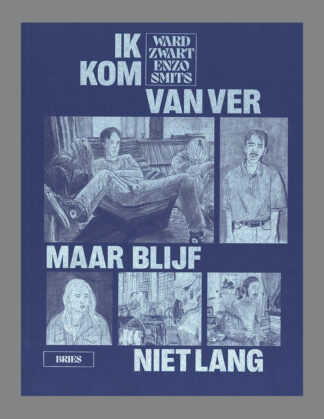