The book ‘giant labour’ presents the history of the construction of the modern Netherlands in the period 1861-1918 in a unique way.

Partly due to major investments in hydraulic engineering and infrastructure in the years 1861-1918, an era of economic prosperity began for the Netherlands. Building activity was buzzing all over the country and new canals, railways, locks and bridges were being built. The construction of the North Sea Canal connected Amsterdam directly to the sea. Rotterdam got the New Waterway. The Netherlands was home to the world’s largest lock and Europe’s largest railway bridge. “Giant work” was done. The Netherlands was being set up for a new era.

At a time when photography was still in its infancy, the minister took the decision to record the construction of the government’s public works. The best photographers of the time were called in. The impressive shots by Pieter Oosterhuis, Julius Perger and Johann Georg Hameter are among the earliest landscape photos in the Netherlands. Historian and geographer Willem van der Ham has brought this special collection of photos from obscurity.

Giant Labor shows all these major engineering works throughout the Netherlands in word and image. In special themes, Van der Ham discusses, among other things, the state of the art, tools and the construction process, the working conditions, the senior gentlemen and the working people, and national pride. Moreover, he unravels the secrets of the surrounding landscape.In DUTCH! 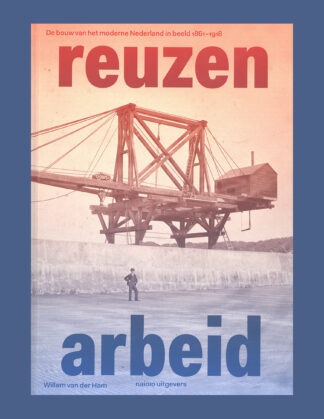