Mike Kelley, Paul McCarthy, and Raymond Pettibon – these Southern California artists formed a bad boy trifecta. Early purveyors of abject art, the trio produced work ranging from sculptures of feces to copulating stuffed animals, and gained notoriety from being perverse. Showing how their work rethinks transgressive art practices in the wake of the 1960s, Pay for Your Pleasures argues that their collaborations as well as their individual enterprises make them among the most compelling artists in the Los Angeles area in recent years. Cary Levine focuses on Kelley’s, McCarthy’s, and Pettibon’s work from the 1970s through the 1990s, plotting the circuitous routes they took in their artistic development. Drawing on extensive interviews with each artist, he identifies the diverse forces that had a crucial bearing on their development – such as McCarthy’s experiences at the University of Utah, Kelley’s interest in the Detroit-based White Panther movement, Pettibon’s study of economics, and how all three participated in burgeoning subcultural music scenes. Levine discovers a common political strategy underlying their art that critiques both nostalgia for the 1960s counterculture and Reagan-era conservatism. He shows how this strategy led each artist to create strange and unseemly images that test the limits of not only art but also gender roles, sex, acceptable behavior, poor taste, and even the gag reflex that separates pleasure from disgust. As a result, their work places viewers in uncomfortable situations that challenge them to reassess their own values. The first substantial analysis of Kelley, McCarthy, and Pettibon, Pay for Your Pleasures shines new light on three artists whose work continues to resonate in the world of art and politics. 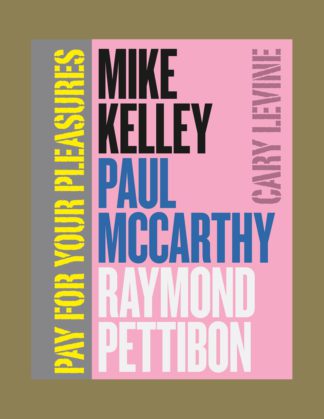