On Accident: Episodes in Architecture and Landscape

This collection by “architectural history’s most beguiling essayist” (as Reinhold Martin calls the author in the book’s foreword) illuminates the unfamiliar, the arcane, the obscure — phenomena largely missing from architectural and landscape history. These essays by Edward Eigen do not walk in a straight line, but roam across uncertain territory, discovering sunken forests, unclassifiable islands, inflammable skies, unvisited shores, plagiarized tabernacles. Taken together, these texts offer a group portrait of how certain things fall apart.
We read about the statistical investigation of lightning strikes in France by the author-astronomer Camille Flammarion, which leads Eigen to reflect also on Foucault, Hamlet, and the role of the anecdote in architectural history. We learn about, among other things, Olmsted’s role in transforming landscape gardening into landscape architecture; the connections among hedging, hedge funds, the High Line, and GPS bandwidth; timber-frame roofs and (spider) web-based learning; the archives of the Houses of Parliament through flood and fire; and what the 1898 disappearance and reappearance of the Trenton, New Jersey architect William W. Slack might tell us about the conflict between “the migratory impulse” and “love of home.”
Eigen compares his essays to the “gathering up of seeds that fell by the wayside.” The seedlings that result create in the reader’s imagination a dazzling display of the particular, the contingent, the incidental, and the singular, all in search of a narrative. 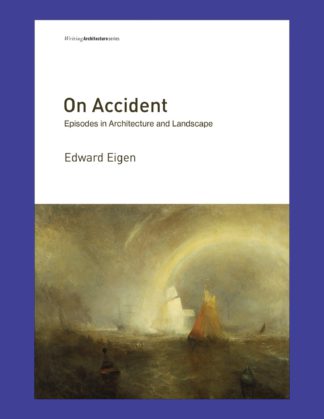 You're viewing: On Accident: Episodes in Architecture and Landscape €27,50
Add to cart
0