Beyond the emblematic figure of Félix Nadar, the exhibition at Bibliothèque Nationale de France embraces for the first time the entire history of the Nadar workshop from the early 1850s until the late 1930s in s the rich collections of the BnF, loans from the Metropolitan Museum of Art in New York, the John Paul Getty Museum in Los Angeles and the Musée d’Orsay. IN FRENCH!
The catalog published on this occasion offers specific studies on each of the three photographers – Félix Nadar (1820-1910), his brother Adrien Tournachon (1825-1903) and his son Paul Nadar (1856-1939) – and their collaborations, and highlights the legacy of one of the most important and most sustainable workshops of the early days of photography.

Portraits and self-portraits.
The book presents a selection of self-portraits of the three photographers and portraits of their private circle made over time, revealing their personal involvement in the workshop, their complex relationships.
The portraits of Baudelaire, Alexandre Dumas, Sarah Bernhardt and George Sand are also among the masterpieces in the book alongside other well-known and influential figures of their time. These shots highlight the different approaches of the three Nadar as well as the evolution of photographic techniques and taste over the course of a century. 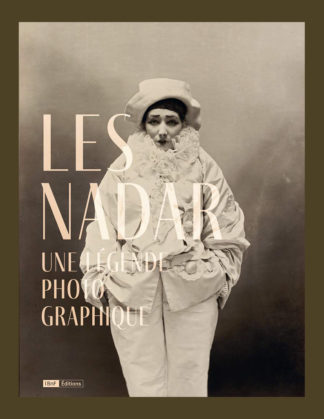