Le Corbusier and the Maisons Jaoul

In 1955, just as the world was pigeonholing him as the high priest of modernism, Le Corbusier shocked the architecture world with – of all things — weekend houses. Built of brick, concrete, stone, and timber, the Maisons Jaoul are the antithesis of everything commonly referred to as “Corbusian.” Their surprising scale gives them a magnificent sculptural presence and the uncharacteristically raw materiality of their exteriors —oozing mortar, rough brick — gives them a deliberately crude, almost craftlike, appearance. Le Corbusier himself never explained this radical change in direction, leaving this design a mystery for future generations to decipher.

Le Corbusier and the Maisons Jaoul is the first book-length, detailed examination of these lesser-known, yet architecturally significant houses. Built for André Jaoul and his son — and their wives — the Maisons Jaoul encompassed four years of intense design activity. Using previously unpublished sources, author Caroline Maniaque Benton thoroughly captures Le Corbusier’s extraordinary journey of discovery. Valuable insights are gleaned from conversations between clients, draughtsmen, and craftsmen; firsthand documents; and letters in Le Corbusier’s own hand. The Maisons Jaoul emerge as both a fundamental reconsideration of domestic living and a radical reassessment of Le Corbusier’s longstanding commitment to modernism. Opening up his process to collaboration with a Corsican carpenter and a Sardinian mason brought warmth, texture, and a distinct aura of vernacular authenticity to the houses.

Le Corbusier and the Maisons Jaoul brings all of the mythic grandeur of these exciting discoveries to life through rare photographs, drawings, ephemera, and plans, and invites those who either admire or dismiss Le Corbusier to reexamine their assumptions and prejudices about the most famous modern architect of the twentieth century.

Dr. Caroline Maniaque Benton is an architect who was trained in Fine Art and in Art History. She has spent many years in the United State researching domestic architecture in the 1950s and the impact of the counter culture on French visiting architects. She teaches history of architecture at the Ecole Nationale Superieure d’Architecture Paris-Malaquais. She lives in Paris. She worked for four years as a curator and researcher at the Pompidou Center. She has taught at the Bard Graduate center in NY in 2003 and 2007 and is currently a visiting scholar at the Canadian Center for Architecture (CCA) in Montreal. She will be teaching at Williams College in the Spring of 2009. 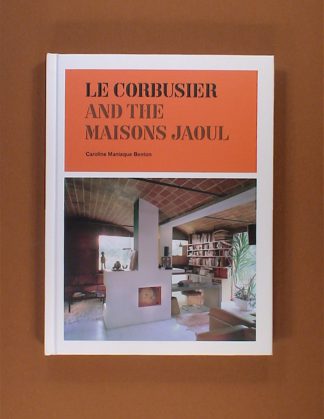 You're viewing: Le Corbusier and the Maisons Jaoul €33,50
Add to cart
0