In 1940, Hans Knoll founded a company in New York that soon earned a reputation for its progressive line of furniture. Florence Schust joined the firm and helped establish its interior design division, Knoll Planning Unit. In 1947, the year after their marriage, Hans and Florence Knoll added a third division, Knoll Textiles, which brought textile production in line with a modern sensibility that used color and texture as primary design elements. In the early years, the company hired leading proponents of modern design as well as young, untried designers to create textile patterns. The division thrived in the late 1940s through 1960s and, in the following decade, adopted a more international outlook as design direction shifted to Europe. In the late 1970s and 1980s, Knoll tapped fashion designers and architects to bolster its brand. The pioneering use of new materials and a commitment to innovative design have remained Knoll’s hallmarks to the present day. With essays by experts, biographies of about seventy-five designers, and images of textiles, drawings, furniture, and ephemera,Knoll Textiles, 1945-2010is the first comprehensive study devoted to a leading contributor to modern textile design. Highlighting the individuals and ideas that helped shape Knoll Textiles over the years, this book brings the Knoll brand and the role of textiles in the history of design to the forefront of public attention. 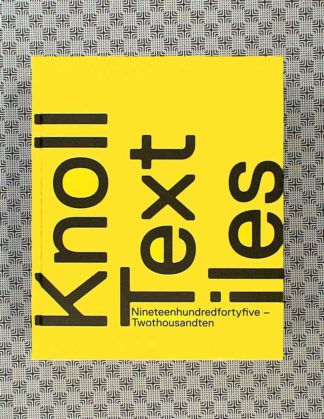