Kojima doesn’t use form as a starting point-instead, his buildings are the outcome of situating space itself at the centre of discourse, plus concepts linked to the fluidity and instability of the phenomena that go to form a building. The fluidity and instability of life and of space itself are concepts rooted in the traditional Japanese culture Kojima reinterprets and manipulates in a contemporary way. The outside of one of his buildings is, therefore, the secondary expression of what has given rise to the inside.

In his text ‘Fluid direction’, included in this issue of 2G, Kojima explains the parameters that configure these design strategies, parameters such as wind, light, sound, water, the movement of the users and the very flexibility of the programmes of needs, which links up with the physical conditions of the surroundings in order to finally take on material form in interior spaces of great richness and complexity.

The projects shown in this volume of the magazine 2G seek to illustrate the strategies used by Kojima, their interrelation and their evolution over time. Especially noteworthy are his projects for multifamily housing, in which he develops the Space Block system of stacked volumes in order to generate spatially interesting apartments, and his projects for schools, in which the user is transformed into the prime mover of spaces that are deliberately ambiguous and open to interaction. 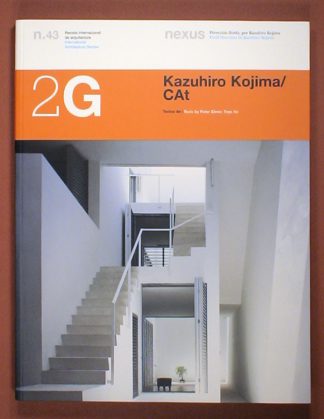