Photographer Joel Meyerowitz (born 1938) began photographing redheads in 1978 against the contrasting blue backdrop of Cape Cod. The portraits from this period are collected in this new edition of Meyerowitz’s 1991 photobook Redheads, featuring 16 additional images. After running an ad in the Provincetown Advocate, Meyerowitz began collecting the experiences of people who grew up with red hair, in addition to photographing them. Making up only two or three percent of the world’s population, their stories of schoolyard bullying and self-acceptance illustrate a broader narrative of growth and beauty.
Despite cultural and racial distinctions between redheads, the phenotypic association between the subjects brings a sense of familiality to the collection of portraits.
Meyerowitz describes how red hair and its reaction to light evokes a sense of the color film process. He is known for his transition to color film during a period of resistance to color photography. “My way of making portraits is not by getting down on my hands and knees, nor climbing high on a ladder, nor getting into bed with a celebrity,” Meyerowitz writes, “but simply standing eye to eye with anyone who has found their way to me, young or old. I need only one or two sheets of film and the patience to see it through.” This hardcover edition includes previously unseen portraits. 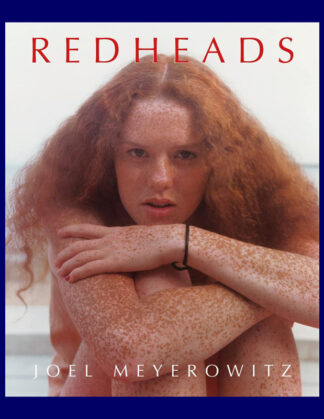