Starting with his student work of the early 1960s, Hockney has depicted quiet domestic pleasures, the faces of friends and the monuments of foreign countries with an unwavering joy in looking and seeing, even as he has employed a restless array of mediums, including oil, photo-collage, pressed paper pulp and quick, intimate watercolors. The accessibility of Hockney’s art has earned him both popular success and jeers from some quarters of the art world that tend to favor “edginess” over happiness. This collection, which is compiled by the artist himself and includes his conversational commentary in the margins, not only gloriously documents Hockney’s career, but also provides a riposte to those who see him as a shallow technician of pretty surfaces. The book is divided into sections that showcase Hockney’s brainy engagement with the classic problems of modern art (“Problems of Depiction: Movement,” “Space and Light”). The case for Hockney’s seriousness may have come at the expense of his playful, mischievous side, however. There would have been more than enough material for an amusing section on the male rear end, for example, which has been as much of a Hockney theme as his famous preoccupation with water. But the book’s theory-heavy arrangement is unobtrusive. There is only the briefest of introductory text, and captions are confined to titles and dates (full information on each picture is tucked away in an index). The art is allowed to speak for itself and the result is, once again, pure pleasure. 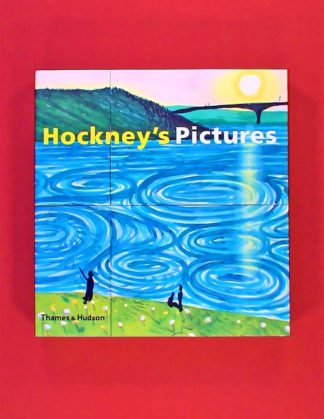