Handelsbeurs Antwerpen: Past and Present

With the support of Handelsbeurs Antwerpen nv, Tanguy Ottomer wrote this tribute to the Stock Exchange of Antwerp: to its glorious history, its breathtaking architecture and its welcoming future. Handelsbeurs Antwerpen – Past & Present is a beautiful and elegant publication with a luxurious finish, presenting unique images and stories.

The Stock Exchange (Handelsbeurs) plays an important part in the history of Antwerp. The original building dates from the 16th century; the current building is from the 19th century, and was built after two fires on the foundations of the first one. The Stock Exchange is where the Antwerp Academy originated in 1664 and where people gathered over the centuries to do business, make arrangements, or, later, sold and bought shares. In 1997 the building lost its function as stock exchange, but it was still in use as a location for several events, like the fashion shows of the Antwerp Fashion Academy. From 2003 onwards the impressive building was vacant for quite some time, until October 2019, when the breathtaking Stock Exchange opened its doors again, after a thorough renovation.

In Tanguy Ottomer’s book you learn all about the history of the Stock Exchange: about the stock activities that took place between 1531 and 1997 (with some breaks), about the two fires that turned the building to ashes, about the architects of the first and the second Stock Exchange, about the organisations that were housed in the building (like the St Luke’s Guild), and the guests who visited (like Winston Churchill). The book also contains chapters about the remarkable architecture of the Stock and the Shipping Exchange, the impressive renovation and the glorious future that awaits the site as a public meeting space, a location for events, a restaurant and a hotel.

All these stories about ‘the mother of all exchanges’ are lavishly illustrated with archive photos (eg. from Antwerp’s FelixArchive and private collections) as well as recent images. They reveal a breathtakingly beautiful historic gem in all its glory, which now shines brighter than ever. 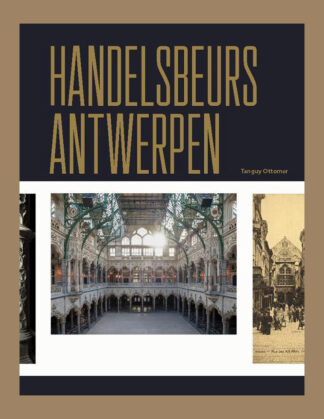 You're viewing: Handelsbeurs Antwerpen: Past and Present €45,00
Add to cart
0