Experimental Jetset is a small, independent, Amsterdam-based graphic design studio, founded in 1997 by (and still consisting of) Marieke Stolk, Erwin Brinkers and Danny van den Dungen. Focusing on printed matter and site-specific installations, and describing their methodology as “turning language into objects”, Experimental Jetset have worked on projects for a wide variety of institutes.

Four years after ‘Statement and Counter-Statement’ (2015), Experimental Jetset returns with their second paperback for Roma Publications. Whereas the previous publication had a more overall monographic scope, ‘Full Scale False Scale’ focuses on a single project: the large, site-specific installation that the studio recently created for the Museum of Modern Art in New York, commissioned to coincide with the museum’s reopening in October 2019. Part reader, part collage, the book forms a subjective archive of research material, just as constructed as the installation itself – an investigation that took them from esoteric colour theories to dark political alliances, and from modernist diagonals to postmodern arches. 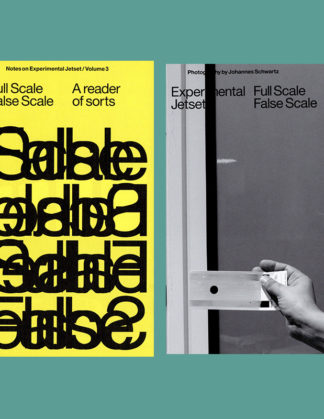