The work of Donald Judd, one of the most significant American artists of the postwar period, has come to define Minimalist art, a label to which the artist strongly objected. The unaffected, straightforward quality of Judd’s work demonstrates his strong interest in color, form, material, and space. Wanting to create works that could assume a direct material and physical presence without recourse to grand philosophical statements, Judd eschewed classical ideals of representational sculpture and created works that relied on clear, definite objects.

Donald Judd: Cor-ten represents the first-ever focused examination of Judd’s works in Cor-ten steel, which he began to produce in earnest in 1989 and would continue to elaborate on until his death in 1994. Cor-ten is an alloy that makes steel more resistant to corrosion, and eliminates the need for paint. With its distinctive red-brown patina, Cor-ten afforded Judd a new medium for exploring the relationship between surface and volume, as well as color and form. Prior to 1989, Judd executed a handful of works in Cor-ten primarily as outdoor commissions or site-specific works. This volume is produced on the occasion of the 2015 exhibition at David Zwirner, New York. Designed in close collaboration with Flavin Judd and Judd Foundation, Donald Judd: Cor-ten sheds new light on a body of work that represents the culmination of three decades of aesthetic output and underscores the mastery and control over material and space that characterizes Judd’s practice as a whole. 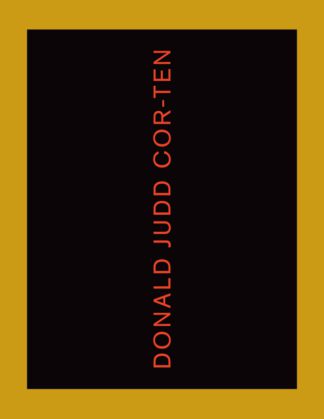