Window-Shopping through the Iron Curtain presents a selection of more than 100 images of shop windows shot by David Hlynsky during four trips taken between 1986 and 1990 to Poland, Czechoslovakia, Hungary, Yugoslavia, Bulgaria, East Germany, and Moscow. Using a Hasselblad camera, Hlynsky captured the slow, routine moments of daily life on the streets and in the shop windows of crumbling Communist countries.

The resulting images could be still-lifes representing the intersection of a Communist ideology and a consumerist, Capitalist tool—the shop window—with the consumer stuck in the middle. Devoid of overt branding or calculated seduction, the shop windows were typically adorned with traditional yet incongruous symbols of cheer: homey lace curtains, paper flowers, painted butterflies, and pictures of happy children. Some windows were humble in their simple offerings of loaves and tinned fishes; others were zanily artistic, as in the modular display of military shirts in a Moscow storefront; and some illustrated intense professional pride, such as a sign in a Prague beauty salon depicting a pedicurist smiling fiendishly over an imperfect sole.

The photographs are accompanied by essays by art historian Martha Langford and cultural studies specialist Jody Berland, as well as Hlynsky’s own account of his time as a flâneur in the shopping plazas of the collapsing Soviet empire—“a vast ad-hoc museum of a failing utopia” that in 1989 began to close forever. 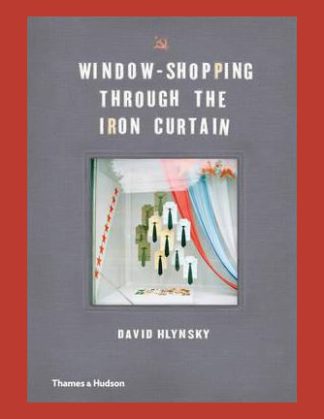 You're viewing: David Hlynsky: Window-Shopping through the Iron Curtain €20,95
Add to cart
0